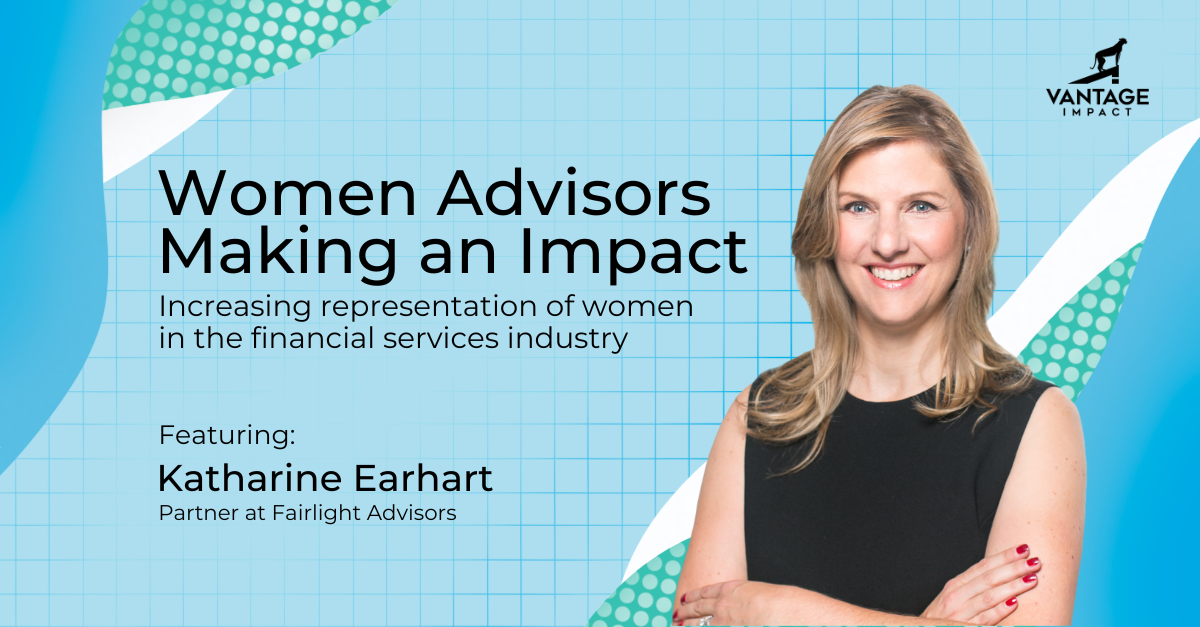 In 2019, Katharine Earhart took a chance that has paid off.

For the decade prior, she and her business partner, Maya Lis Tussing, had been contemplating launching a registered investment advisor (RIA) firm. They initially played around with the idea in 2009 while working together at BlackRock, spending time strategizing and diligently searching for an idea that would be both viable and impactful.

The dream was pushed aside when new opportunities for growth at BlackRock presented themselves, but it was a dream that kept resurfacing.

Earhart’s original dream was to become an English professor. She studied Shakespeare at UCLA but decided to gain some work experience before pursuing a PhD. She began her career in Training & Development at Charles Schwab before being encouraged by a friend and colleague to pursue a different role.

“They told me, ‘Go be on the front lines, go be where the product is, go where the revenues are generated—learn that business.’ And that was the best advice I ever got,” she says. “That was kind of it from there.”

After a short time, she was hooked. “I loved learning about stocks and bonds and trading; talking to clients, educating them,” she recalls.

In the years that followed, she had what she calls a “portfolio career,” rotating through different roles (IT, operations, finance, sales, marketing) at a variety of companies: mPower Advisors (one of the first robo advisors for 401(k) participants), Barclays Global Investors, iShares/BlackRock and Alesco Advisors.

Earhart says the culmination of those experiences prepared her for being a business owner and having a breadth of responsibilities.

Ideas for RIAs kept nagging Earhart and Tussing. They were apprehensive about starting a business, so they decided to join an RIA to gain familiarity working in that model. They identified a firm that focused on nonprofits, exposing them to that sector and inspiring them to support nonprofits in the future.

The experience wasn’t exactly as they had hoped, however.

“We were hired as the first female advisors in the firm, and it was hard,” Earhart explains. “We had a lot of ideas and a lot of excitement, but we were under someone else’s brand.” She says that experience fueled their motivation to become their own bosses.

Finally, they went for it. In 2019, they founded Fairlight Advisors with the goal of helping nonprofit organizations and endowments secure their futures. Fairlight Advisors assists these organizations with risk management, establishing healthy cash reserves and liquidity funds, as well as long-term investing. In addition, they administer employee retirement plans for nonprofits and also manage wealth, mainly for philanthropic-minded individuals and families.

The experience of launching the RIA has been rewarding for Earhart, and she hopes other women are inspired to do the same despite the challenges.

“The biggest challenges were, and still are, time,” Earhart says. “Finding time to do the things you want to do to build the business versus the everyday managing clients, onboarding new clients. You do want to focus on being strategic.”

Having a business partner was a key advantage in her eyes, throughout the process, and she recommends others launching RIAs consider partnering with a colleague they trust: “The number one quality I would focus on is trust. Is this someone you trust, that has your back? Someone who will tell you the truth—about anything?”

In addition to the trust they have in one another, Earhart and Tussing work well together due to their complementary personalities. While Tussing thinks very strategically, Earhart’s strength is being an empathetic, good listener with their clients. Having an equal capacity and tolerance for risk is also integral to a business partnership. This means being open and honest about expectations and compensation.

A surprising revelation Earhart and Tussing had while discussing compensation was that they hadn’t had the conversation sooner, despite years of working together.

“We ended up gathering a few of our other female colleagues and we said, ‘look, we’re going to tell you what we make, because we want you to benefit from this information,’” she says, hoping her colleagues would use that knowledge to advocate for themselves during salary negotiations and career development.

Through such actions, Earhart demonstrates her passion for being an ally to other women and minorities, especially in the financial space. She steadfastly believes that celebrating diversity doesn’t just mean hiring a diverse staff so you can put their faces on a website.

“Are you really open to hearing fresh ideas, new ways of doing things? That’s really the benefit of hiring a diverse staff,” she explains.

Earhart is also passionate about making referrals to other woman-owned businesses, even other firms that could be considered competitors. “There is more than enough business to go around, and we need to support each other as women,” she says.

In a space dominated by men, Earhart and Tussing have found ways to stand out.

“We put front and center that we are a women-owned and operated business,” Earhart says, noting they went through the lengthy process of earning a certification from the Women’s Business Enterprise National Council (WBENC), which is the “gold standard” certification for women-owned businesses in the U.S.

Being owners absolutely distinguishes them, because women asset managers represent just 1% of the industry, she says. 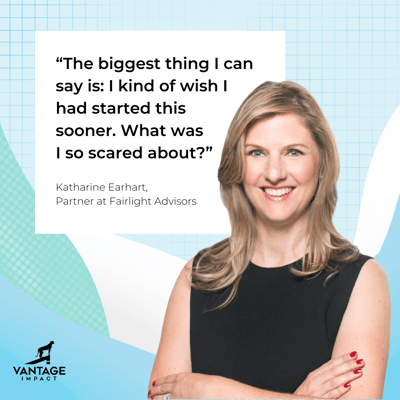 “I don’t think people realize that. While more and more women are becoming advisors, they are not owners,” Earhart explains. “We were under an RIA and we were not owners, and we were going to be a far cry from ever even having equity in the firm,” she says.

Knowing that truth was a catalyst for Earhart finally taking the steps to become her own boss, an experience that has been so rewarding.

“The biggest thing I can say is: I kind of wish I had started this sooner,” she laughs. “What was I so scared about?”